Mexico is a beautiful country, with some very unique urban areas and rural landscape. After church last Sunday, we took Marla and son Kyle to scenic Tequisiapan, which was about halfway to our goal, the small town of Jaral del Progreso, Guanajuato. More on that in a bit.

The word “quaint” is, well, overused, but it’s a word that really describes the small, Mexican town about two hours north of Mexico City. Look it up, or click the link. It’s a great little place.  We spent the night at Hotel El Relox, and beautiful hotel with spotty hot water…but hey, one can’t have everything!

Marla and her family has befriended somewhere around 10 Mexican men, who work on a flower farm in Marietta, PA. It is seasonal work, so right now the men are back in their home town. Marla wanted to visit them on their home turf. One learns so much about migrant work and the families that are waiting for their husbands and fathers on the south side of the border. At one point I asked one of the wives this question, “how do you feel when your husband leaves for half a year.” She was visibly moved by the question, and after a difficult pause, she said, “What else can we do…we cry.”

I can’t help but think that our whole national conversation would be very different if we could only understand more sides of this very difficult world-wide phenomenon, immigration. These men have contracts, which they honor. In the larger discussion of immigration, work contracts such as these men enjoy have to be part of the equation.

And…ok, here I’ll say it…amnesty. Many people in the U.S. are living beside people who have been living in the U.S. and contributing to their communities for 10, 20, even 30 years…their kids were born U.S. citizens, they pay taxes, they are friendly people, and love the U.S…but they are illegal aliens. The last major amnesty program was promoted by a president you may recognize. Ronald Reagan. Yes, it was offered in exchange for tougher border control. Hopefully both are possible today.

But enough of that! Enjoy these beautiful pictures of Mexico! Most of them are from our last stop, including the header photo, the colonial city of Guanajuato. We also visited Cholula and Puebla in her short time here. 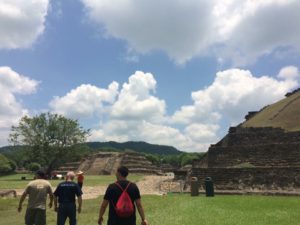