Too Fearful to be Sorrowful

Yes, it has been quite a week in the United States. A quick look at social media highlights the divide. Rainbows decorate the White House and Facebook. Christians the likes of Franklin Graham, Albert Mohler and John Piper have all addressed the issue of U.S. Supreme Court’s ruling regarding gay marriage.

I sense an undercurrent of fear in the Christian community. Fear of the legal ramifications for churches in being sued for refusing to marry homosexual couples. Fear of the church losing legal guarantees long cherished. Fear on an individual level of being persecuted; a recognition that rulings such as this simply confirm that the world is not getting more friendly towards Jesus followers.

My own mind has been flooded with pieces of text from books that I love. I managed to find this quote from Blamires’ The Christian Mind, ” For the Christian mind is no longer cultivated.  The Christian mind is too provocative, too dangerous, too revolutionary perhaps. If nourished, if fed fat on the milk of the word, it will perhaps collide so violently with the secular mind which dominates our comfortable and complacent set-up that we Christians shall find ourselves, mentally at least, persecuted again.”

Then this quote from Budziszewski’s book, What We Can’t Not Know:  “We are not in Dante’s inferno, where even the sinners acknowledge the law which they have violated. We are in some other hell. The denizens of our hell say that they don’t know the law—or that there is no law—or that each makes the law for himself. And they all know better.”

What I would like to add to the conversation is this: Christians aren’t of this world, and the church does not generally become stronger when it has more rights, but when it has fewer. The whole thrust of the message of Jesus, seconded by Paul, is that of laying down rights, of willingly becoming defrauded, of losing to win, of dying to live. Jesus’ values are unnatural, because they are supernatural.

Suddenly we’re not sure we like Jesus’ message. The victory and blessing part is great. The dying and suffering part…not so much.

John Piper, in a recent article entitled So-Called Same-Sex Marriage, Lamenting the New Calamity, addresses the sorrow that should accompany the church’s reaction to such momentous societal events. We should be grieved, because sin and sinful practices (all of them) causes dysfunction, pain and ultimately judgement. His conclusion is this: “This is what I am writing for. Not political action, but love for the name of God and compassion for the city of destruction.”

Perhaps we are too fearful to be sorrowful. 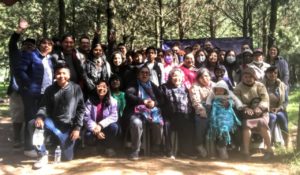