A Wonderful Week in Oaxaca

This past week, 17 of us traveled in three vehicles to the Mexican state of Oaxaca, and enjoyed a wonderful, challenging week of ministry with pastor Gaspar Chable, his wife Estela and his kids Abishai, Celicia and Hiram. We’ve had the privileged of partnering with the Chable family in a number of different ways in the past, and had a lot of fun with Gaspar and Estela at a pastors conference a few years back. But this was the first time we’ve done a short-term missions trip with them. It was great!

A group of 11 people from Mt. Calvary Church once again joined us for a week during the summer, their 5th consecutive year doing so, which has to be a record or something. So this year we decided to drive around 6 hours southeast of Mexico City to the beautiful state of Oaxaca. Gaspar and Estela live in Rancho Tunillo, a Baptist ministry center and functioning farm on the edge of Oaxaca City. But their ministry extends for miles into many rural areas their beautiful, but often marginalized, state of Oaxaca.

We did a lot of driving, leaving the ranch at 7:15 a.m. and driving over two hours to three different villages, for three consecutive days. We met precious Christian families that have endured prejudice and persecution like few of us will ever know, and the Lord has raised up a church, a remnant of faithful followers, in each one of the neighborhoods we visited. We were able to personally distribute over 100 dresses from Elizabethtown Sewing Studio, as well as over 100 reading glasses provided via Restoring Vision, and about 20 simple hearing amplification devices.

Gaspar told me a story of the first effort to build a church building in San Pedro Amatlán. The believers had piled up sand and gravel on the lot, ready to mix it for concrete and pour a foundation. Under cover of darkness, several days before construction was to begin, people from the local Catholic church came with buckets and moved both piles of material, scattering the sand and gravel for miles on the nearby roads, thus delaying construction. The third village we visited, San Cristóbal Amatlán, is situated near the highest mountain in the whole region, a site known to be the spiritual center of the whole area. Townspeople take turkeys and chickens and hike to the top, where ceremonies to the devil are preformed.

Zapoteco is the language spoken by many in the villages we visited, and by nearly everyone in San Cristóbal. So cool to hear people speak in their native languages! We thank God for allowing us to work together with churches from both Mexico and the U.S., speaking three different languages, but with one Spirit that unified us all!  Check out the pictures and video below: If you’ve been following this site, you know we’ve been posting quite a bit about Liebenzell USA, and our transition […] 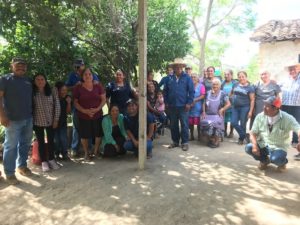