The Pilgrimage of Church Planting

If you have a church building that you go to pretty much every Sunday, and perhaps twice or three times a week, and if you your church has leadership, probably at least one pastor and possibly several, then you probably are attending an established local church.

We have been involved in the most recent church plant, Sendero de Vida Palmas 1, for about two years and four months now, and have been in the same place that whole time, a rented facility called “El Rincón Feliz,” or “Happy Corner.” It’s a colorful place, with painted images of Toy Story, the Avengers, Plants and Zombies and a bunch of other superheroes and princesses. Location has been ideal, and rent has been quite economical. But apparently it’s time to move on. The owner is converting the space to something else…squash courts or fronton tennis or something. So this Sunday, March 3, 2019, is the last Sunday we have use of the building.

Time to move on. But to where? We have some ideas.

All of this, of course, brings back memories. The first church plant, in Iztapalapa from 1997-2003, involved meeting in two homes and four rented facilities until the church was finally able to purchase a small property and build. Here in Ixtapaluca, the Santa Bárbara church (2005) met in a home, then in several different places in a portal, rented pole tent set up on the street until a small home was purchased, and remodeling began. The Jesús María church began (2010) in a small, two-bedroom rented house on a corner, with the band set up in the kitchen and kids sitting up the steps. A year and two months later the church rented a second-floor facility where a maximum of 85 seats could be crammed in. Finally, two years or so later, the land was purchased where the church currently meets.

During much of those early days, the actual church meeting place is mobile. It changes. Sometimes a change in location results in growth, as people become aware of a local church meeting close to them. Other times, for whatever reason, people stop coming. The good thing, though, is that it reminds us all that the church isn’t a building. The church is us.

But of course, we would love to have a property of our own for the Palmas 1 church. We’ve begun to pray more earnestly for that, and to investigate options. Our target neighborhoods are highly densely populated areas with very little available land. But there’s always and answer.

Below, some photos from past church plants!

1 thought on “The Pilgrimage of Church Planting” 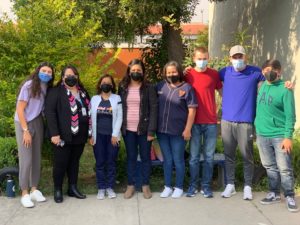