This year was the second year for our DVBS program in the relatively new (2 1/2 year old) Palmas 1 church. After having relatively low numbers last year, we were all excited to see how many kids would attend this year’s club. The first three days, between 53-56 kids were present, and we finished out the week Th-F with 65 kids present. It was quite the week!

In addition to the 65 kids were many volunteers from the Palmas 1 church, as well as a team of 15 friends from Hope Community Church, in Mt. Joy, PA. In addition to the kids club, we also invited teams from the neighborhood to a 3-on-3 basketball tournament, the first time we’ve done anything like this. Sam and Sammy, along with help from David and Fer, painted a half-court key and three-point line on the tile of the Jesus Maria church, using a special blue paint with a non-slip surface. The event was a huge success, with 12 teams competing for prizes with included basketballs, medals and a nice trophy for the winning team. During each day, the gospel was shared, including a skit from the Hope group. While the basketball competition was going on, 2 hours of English classes were offered, from T-Th. Around 10 people participated in these classes.

One priority in our events is that the community is reached. For the DVBS, of the 65 kids attending at the end of the week, only 10 were church kids. Only a fraction of the basketball players were kids from the youth group.

Lots more happened as well! We were able to encourage men at a rehab center early in the week, and blessed a group of older people at a nearby mall with reading glasses and hearing aids. It’s always a blessing to see the church, God’s family, work together in harmony, seeking to communicate the gospel through many different methods and in many creative contexts! Below, a short video of some of the highlights of the week.

Baptisms! (with photos and video)

Baptisms are always my favorite services, because in baptisms, discipleship comes into focus, and both conversion and commitment are highlighted. […] 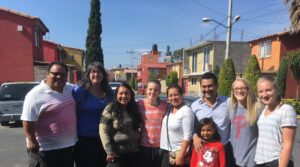 Two weeks ago, on a Saturday, Edgar Corona was walking to our house for a men’s Bible study. He never […]